Roast Turkey with all the Trimmings 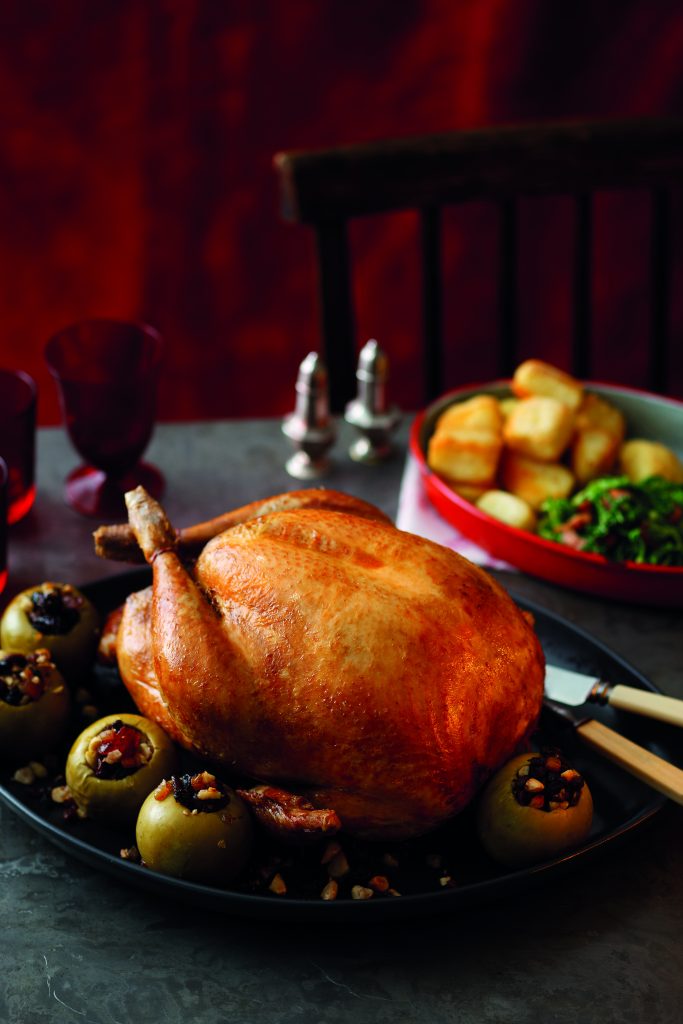 If you’re a traditionalist at Christmas, Nick’s Roast Turkey is a classic. Mouth-wateringly good – enjoy!

With a frozen turkey, allow at least 24 hrs for it to defrost completely. Remove the giblets as soon as possible and set aside for stock later. Cook the bird from room temperature.

Cut the skin between the leg and the breast then gently open out the legs, this will allow the heat to penetrate quicker. Cut the orange in half before placing inside the cavity of the bird along with the thyme. Brush the turkey generously with olive oil. Season well with salt and pepper and place in a roasting tray. Cover the bird loosely with tin foil to allow a flow of air to circulate.

Cook at 200C for approx 30 minutes then reduce to 160C and cook for a further 75 minutes before removing the tin foil. Turn the heat back up and cook for about 15 more minutes to get the skin golden brown (keep basting). Remove, cover and leave to rest for 30 mins. Cooking time will depend on the exact weight of the bird. A simple rule is 20 minutes per kilo plus 30 minutes at the end plus 30 minutes resting.

While the bird is cooking, peel and chop your potatoes, boil for 10 mins in salted water then drain well. Shake them in the colander to roughen up the edges and season with pepper. Heat the goose fat in a roasting tray in the oven (200°C) and, when hot, tip your potatoes in and stir around. Check them after 20 mins and turn over. Cook for a further 20 minutes. Remove from the oven and serve immediately.

For the parsnips, peel then remove the top and bottom before cutting lengthways into quarters. Remove any woody parts then place in a roasting tray. Rub with olive oil, season and place into a hot oven for 30 minutes, turning occasionally.

Place the stuffing in a lightly oiled separate tray, press down, and cook at 190C for 30 mins until the top is crispy. Don’t put it in the bird – by the time it’s cooked through the bird will be overdone, and the stuffing grey and squashy.

For the sprouts, remove the root then peel off the outer leaves. Shred the sprouts as if they were mini cabbages. Finely chop the bacon. Fry the bacon in a little oil and butter, throw in the shredded sprouts and stir-fry. Add a tbsp or so of water and continue to fry for a minute. Serve immediately.

For the gravy, pour off and discard any fat from the roasting tray then pour the turkey juices into a small saucepan. Bring to the boil before adding some veg water or chicken stock, plus a few gravy granules to thicken.

Great enjoyed hot or cold, this quiche recipe is sure to be loved by all the family.

Perfect for a simple, mid-week dinner for the family.

Best served with your favourite rice and topped with fresh coriander, lemon and another dollop of Quark!