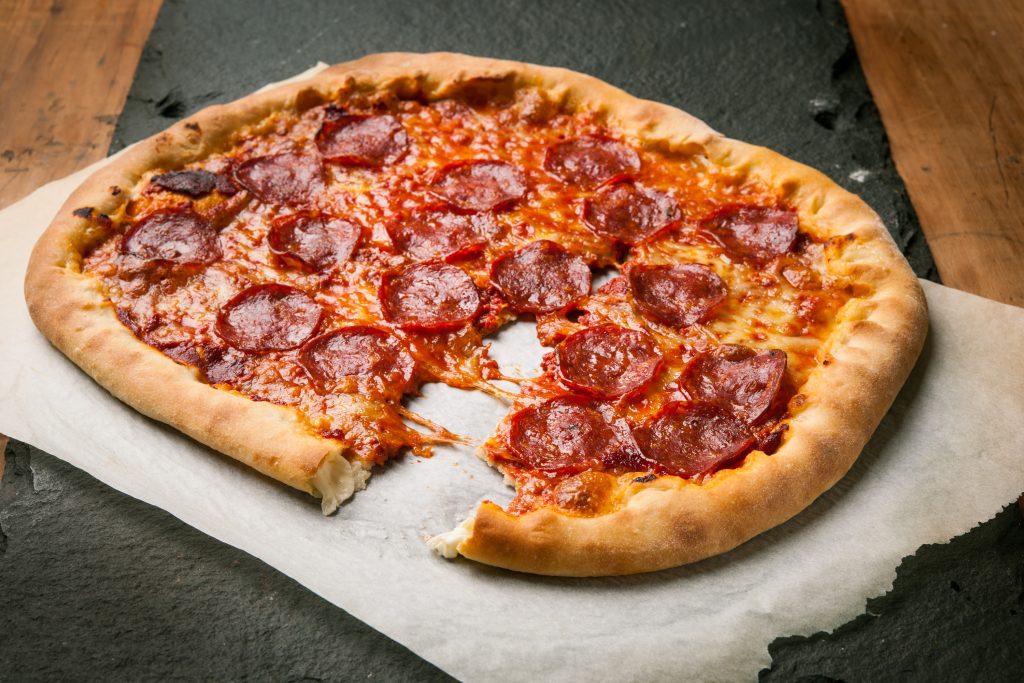 That million calorie takeaway pizza you’re thinking of ordering might be pretty delicious, but you’ll regret it in the morning. Why not learn a new skill and enjoy something that tastes even better, for a fraction of the cost?

That million calorie takeaway pizza you’re thinking of ordering might be pretty delicious, but you’ll regret it in the morning. Why not learn a new skill and enjoy something that tastes even better, for a fraction of the cost? The saving is for both your wallet and your waistline. And don’t think I’m holding back with this one – there are no half-fat substitutes here.

I’d say one whole pizza (this recipe makes two), along with a side-salad, would serve two large hungry individuals such as myself. Each one, crucially, includes a lot of cheese. And it’s still healthy, comparatively. Besides, pizza dough was invented for the lazy. It’s so, so easy. You can mix the ingredients, chuck the dough in the fridge and forget about it for three days. When you decide to use it, it won’t just taste fine: it will be way better than if you made it and ate it on the same day. Bread is forgiving that way. Obviously, there’s no kneading involved. I just don’t see the point. Yup, it might take anywhere between two hours and two days to see the finished round of cheesy loveliness, but because we don’t have to knead it takes very little of our time.

First, make your dough, at least a couple of hours before you plan on eating your pizza. Into a large bowl, weigh your flour, yeast, salt, water and oil. Mix these together to make a rough dough. Cover this with cling film and leave it for half an hour.

After this time, remove the cling film and give your dough a poke and a prod and a fold. This rest and fold replaces the need to knead, and you should notice your dough is very stretchy and elastic. Replace the cling film and leave the dough to rest for at least an hour at room temperature. If you need to leave it longer, put it in the fridge.

Before you plan on rolling out, preheat your oven to 220C/200C fan/Gas 8. Search out two large baking trays.

Flour a work surface, and turn your dough out onto it. Divide it into two, and using plenty of flour, roll each one out into a large circle. Keep turning as you roll, to stop sticking. Once each is as thin as you can get it, toss and spin it into the air, stretching it out as much as you do so. Place one each onto your baking trays.

Drain the water from the mozzarella, and cut two of the balls into thin strips. Lay these out along the edge of each circle of dough, end to end. Roll the edge of the dough over, sealing the mozzarella in. Press tight, to stop any leaks.

Spread tomato puree across the middle of both circles using the back of a spoon, then tear the rest of your cheese on top. Finally, top with slices of pepperoni to cover all available space.

Bake in your very hot oven for 15 minutes or so, or until your cheese is turning golden brown and you just can’t wait any longer. Enjoy hot, as soon as possible.

The best way to stretch out pizza dough is the traditional – to spin it high in the air, catching it over your knuckles. This is actually much easier than it looks, and I’d encourage you to have a good go. If it doesn’t end up on the ceiling, it gives you perfect results each time.

Great enjoyed hot or cold, this quiche recipe is sure to be loved by all the family.

Perfect for a simple, mid-week dinner for the family.

Best served with your favourite rice and topped with fresh coriander, lemon and another dollop of Quark!