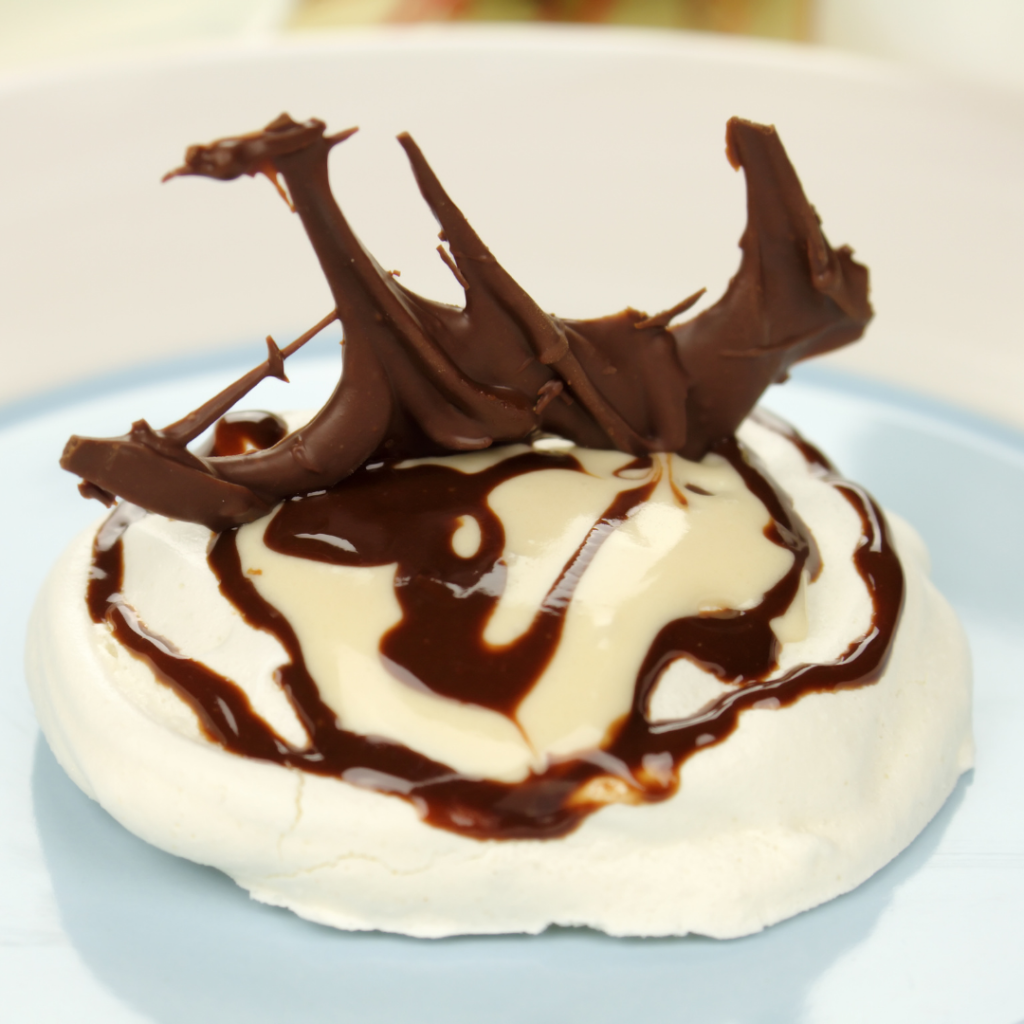 Celebrity chefs Paul Rankin and Nick Nairn set sail on a new cooking adventure, in which they creat this beautiful and delicious dessert.

Preheat the oven 130C (260C), Gas mark. To make the meringues, whisk the egg whites until soft peaks have formed. Fold in the caster sugar a tablespoon at a time until your have achieved a shiny meringue.

Put the cornflour in a small bowl with the lemon juice and coffee and stir to dissolve. Fold into the meringue. Spoon large spoonfuls on to parchment lined baking sheets and make a slight dip in the centre of each one – you’ll need 8 meringues in total.

Place in the oven for 30 minutes, then sprinkle over the hazelnuts and return to the oven for another 30 minutes until they are turned a nice light brown colour and are crisp. Leave in the oven to cool with the door slightly ajar. This will prevent the meringues from cracking whilst they cool.

Meanwhile, make the chocolate mousse. Melt the chocolate over a pan of simmering water. Remove from the heat and leave to cool a little. Meanwhile, whisk the egg whites until soft peaks have formed and then whisk in the caster sugar until stiff peaks have formed and you have a stiff meringue. Whisk the coffee into the whiskey to dissolve and then stir into the cooled melted chocolate with the melted butter and egg yolks. Fold in the meringue and cover with clingfilm. Place in the fridge and chill for 2-3 hours until firm.

To make the salted caramel sauce, heat the sugar with the water in a heavy-based pan until caramelised and rich golden brown, without disturbing. Stir in the cream a little at a time, be careful as it will splutter and spit. Simmer for a couple of minutes until slightly smooth and thickened. Add the salt and then aside aside to cool and thicken slightly. Transfer to a squeezy bottle.

To make the hazelnut brittle, increase the oven temperature to 180C (350F0, Gas mark 4. Place the hazelnuts in a shallow non-stick baking dish and roast for 6-8 minutes until toasted. Tip into a clean tea towel and roughly rub off the skins, then put back into the baking dish. Heat the sugar in a heavy-based frying pan until caramelised and rich golden brown, without disturbing. Pour the caramel over the hazelnuts, mixing with a spatula to ensure they are all well covered. Leave to set and harden, then finely chop with a sharp knife into shards.

When ready to serve, whisk the cream with the icing sugar and vanilla until soft peaks have formed. Put a spoonful in the bottom of each serving bowl, which will help to keep the meringues in place. Add a meringue and then top each one with a quenelle of chocolate mousse. Cover with another spoonful of the vanilla cream and drizzle over the salted caramel sauce. Scatter the hazelnut shards on top and then decorate with the chocolate curls.