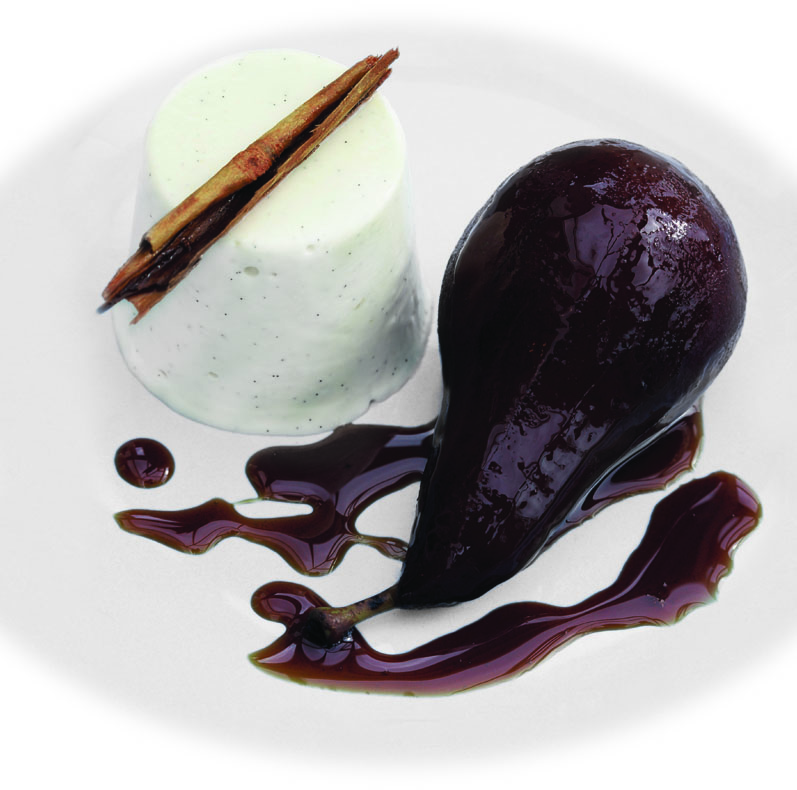 Gourmet elegance is made simple with this fantastic recipe. Cool and serve a pear each with the mousse and a drizzle of the sauce for optimum indulgence. And it tastes all the better with Graham’s Gold double cream.

Put 5 tablespoons of cold water into a small pan. Sprinkle over the gelatine and leave it to ‘sponge’ for 5 minutes.

Mix the yoghurt, crème fraîche and sugar together in a large bowl until smooth. Lightly whip the cream until it begins to thicken and fold it into the yoghurt mixture with the vanilla seeds.

Place the pan of gelatine over a low heat and leave until clear. Stir it into the creamy mixture, making sure it is all mixed well. Whisk the egg whites in a separate bowl until they form soft peaks – the tips of the peaks should flop over, not stand upright.

Fold 1 large spoonful into the yoghurt mixture to loosen it slightly, and then gently fold in the remainder. Spoon into 6 lightly oiled dariole moulds or mini pudding moulds, cover with cling film and chill overnight. To serve dip the moulds briefly into warm water and invert onto serving plates.

Put the sugar in a saucepan and put over a gentle heat until it melts and finally turns to a caramel. When the caramel is a good colour, remove from the heat and quickly pour in the red wine. It will hiss and splutter, so watch out!

Place over the heat again, add the vanilla seeds. Stir until the lumps have dissolved.

Peel the pears leaving on the stalks. Using a melon baler, scoop out the seeds and pith from the bottom of the pears before placing them into the boiling syrup, stalks upwards. Bring back to the boil.

Simmer for 10 minutes then remove from the heat and allow to cool in the syrup. Do this 24 hours in advance for the best results, ensuring the pears are covered by the syrup.

Next day, lift out the pears and boil the syrup rpaidly until it forms a thick sauce. Cool and serve a pear each with the mousse and a drizzle of the sauce.